For me Swiftsure began on the week before as I scrambled to get all the gear together for the race. A life jacket with a harness, a tether, as well as a water activated light attached to my life jacket. Lots of little things which all make lots of sense, but were unexpected when I excitedly signed up for the race the month before. With all my gear in my duffel bag, I boarded Big Ben the night before the race to avoid Tour de Victoria road closures that would make it difficult to get to the boat on time in the morning.  Captain Jim McLaughlin (of the Oak Bay Sailing School)and most of the other 6 members slept on board the 50’ Benetau Oceanis that night. 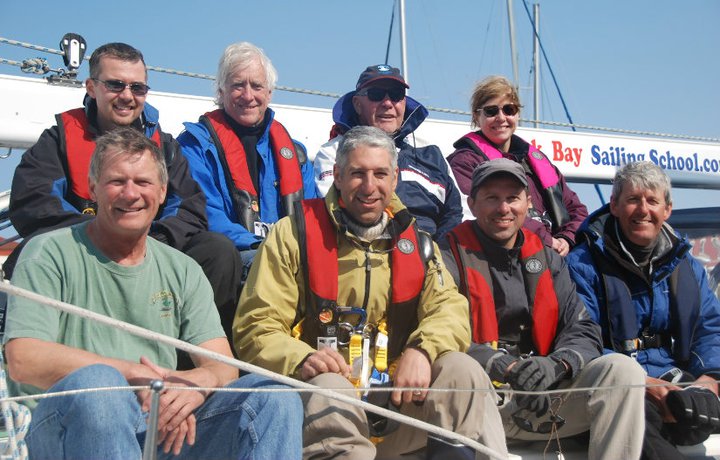 Everyone was up by 7am, and after a light breakfast we had a brief discussion about how we would start the race, and who would be responsible for which tasks. Jim II was charged with setting up a Helm and Navigation rotation for our crew of 8: one hour on navigation, followed by one hour on the helm.  This meant that everyone would be able to get some sleep during the night if the race went long.  With a forecast of winds of 10-20 knots, there was some talk of getting home for a late dinner that night, but when we motored out of the Victoria harbour at 8:30am, winds were light and stayed light as we arrived at the start line just off Clover Point.

The first groups of boats started their races beginning at 10am. Our “Juan de Fuca” race started a bit late at 11am.  Unfortunately when the cannon fired for our start, the wind died all together, and we were drifting backward with the flooding current of 4 knots.  For about half an hour we struggled with the sails, trying to move into a position with better wind, but we continued to drift backwards with five other boats.  The yachts with spinnakers held their own at Clover Point, and slowly started to make headway at the current slowed. Finally we decided we’d better drop anchor before we ran into Discovery Island. 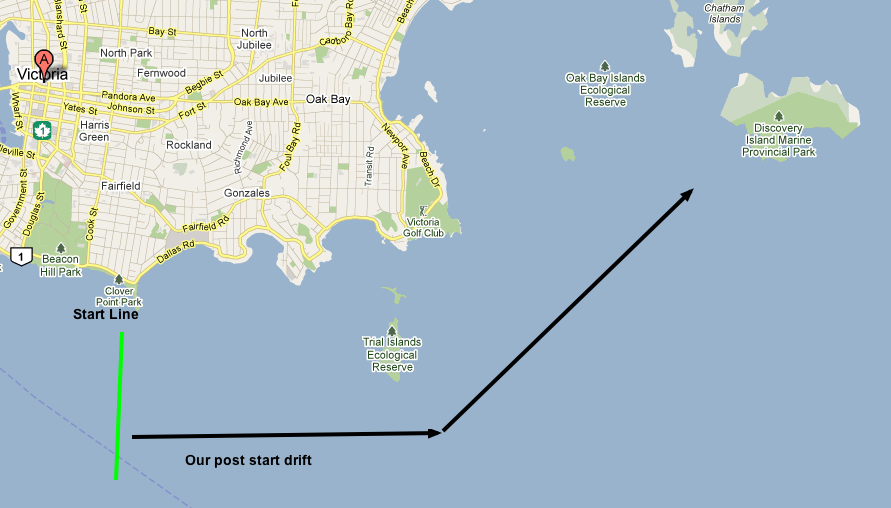 We dragged our anchor for 10 minutes before pulling it up and lashing the rode from our spare anchor to our primary anchor. Our lashed up “extended” anchor solution worked, and we came to a stop about one kilometer north of Discovery Island.  There was still no wind, so we talked, drank a beer or two, and kept tabs on the Champions League final on our iPhones until about 3pm (yes, Barcelona did win).  With the wind rising, and the flood current slackening, we weighed anchor and started making our way back to the start line.  We passed the mouth of Victoria’s inner harbour a 5pm, which was slack tide, and got a close up look at the side of a very large freighter passing by.

We now we had the ebb current helping to push us the 75km towards Clallam Bay at the base of the Olympic Mountains in Washington State. The winds remained steady until about midnight. We were able to enjoy a completely clear night sky as we slowly beat our way up the median of the shipping channel with the 5k wind wafting directly down the strait.  The night sky was amazing bright without the city lights to obscure them.

I took my second shift at the helm and navigation station between 4am – 6am. Things were quiet and uneventful as we beat windward, zig zagging back and forth the median between the shipping lanes in the strait of Juan de Fuca.  My iPad with it’s Navionics software was great to have with us in the cockpit, so we could easily keep tabs on exactly where we were. Visibility was great for night time, and thankfully we didn’t see or come close to any freighters during the night. By 7am we were able to see Clallam Bay where we had to round the marker before heading home. The closer we got to the boat marking the turning point, the lighter the winds became. This is when the talk started about possibly not making it home until some time Monday morning. 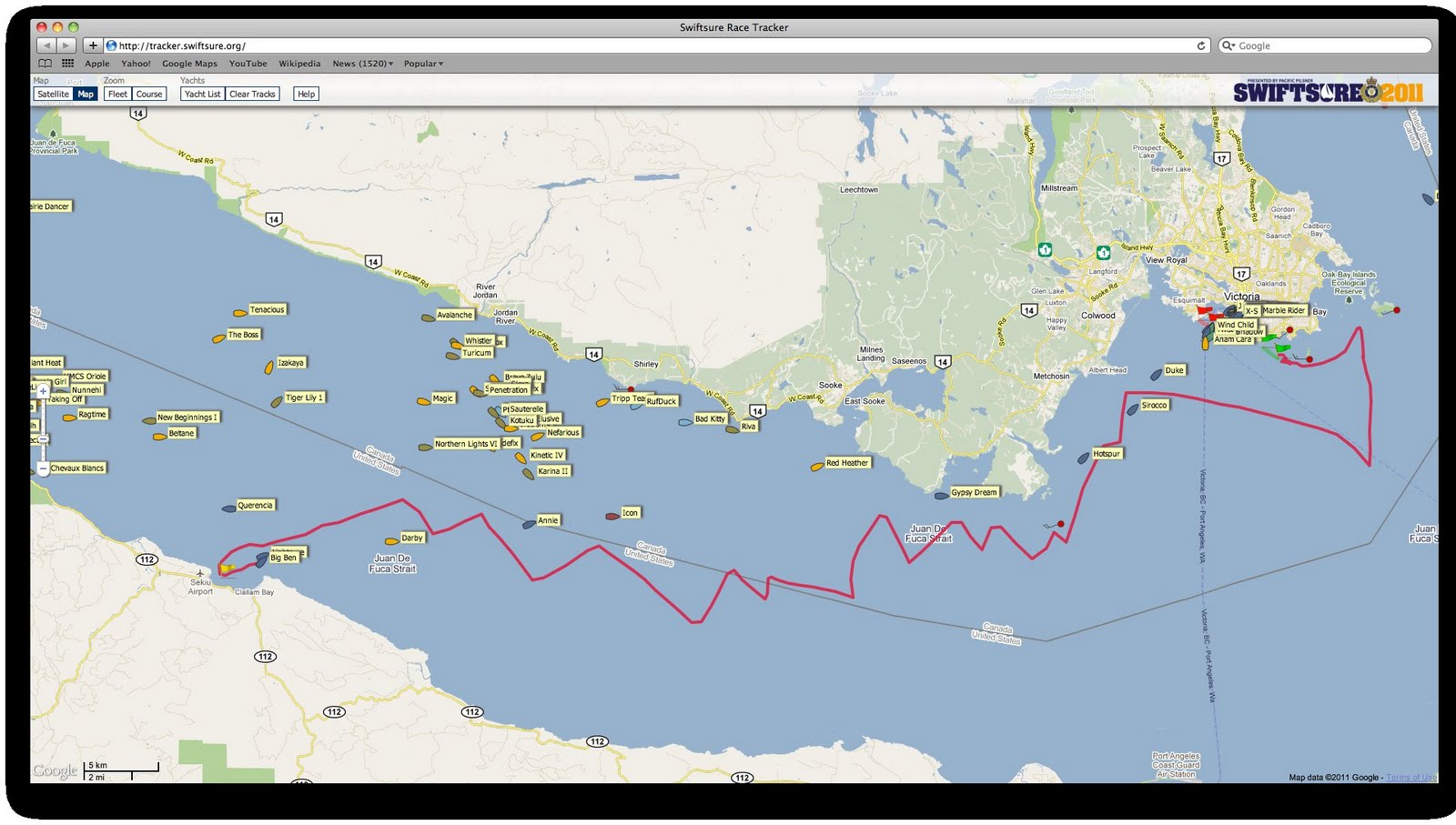 As we rounded the marker boat, just 100 meters off the shore of Clallum Bay, the crew of the boat threw us a zip lock bag full of chocolate bars, to help us keep our energy up before eating breakfast.  Unfortunately with a headland blocking the wind, it took us over an hour to get out of the bay and into the strait where there was a bit more wind. As we were inching our way out of the bay I decided to go below and get a bit of sleep.

When I woke an hour later I could hear the diesel engine running and could tell that we were moving much more quickly through the water than we had been all night.  At first I thought that we had decided to motor home because of the light winds.  When I finally came to and asked what was going on, it turns out that we’d killed the house batteries using the lights and electronics during the previous 24 hours, and were running the engine in order to recharge them.

The good news was that we were now moving much more quickly, and were heading towards home on an almost direct broad reach rather than tracking back an forth into the wind as we had been doing on the way out. The forecast was now predicting winds of 25 to 35 knots in the late afternoon, so we were anxious to get home before things got too windy.

The wind did start to pick up as the afternoon progressed, so we progressively furled in our Genoa and main sail. By the time I took the helm at 3pm, the wind was blowing and, and Big Ben was twisting in the water as sizable swells from out of our rear starboard quarter pushed us towards home. It was hard work struggling with the helm, trying to keep Big Ben from looking like a drunken sailor.  I felt a little bit better to see Jim struggling with them when he took the helm after me. 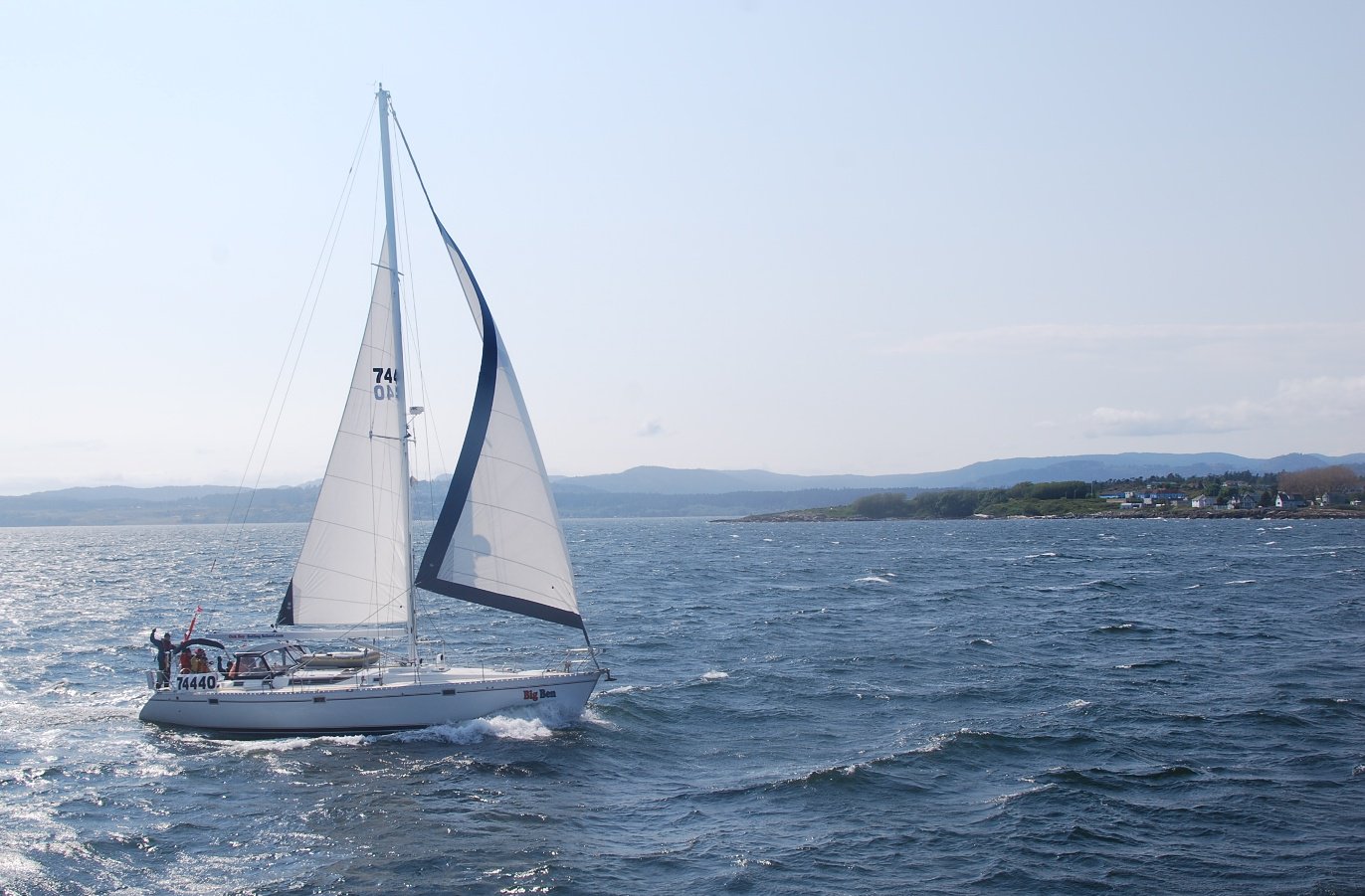 We crossed the finish line at the entrance to Victoria’s inner harbour at about 4:30pm, after almost 30 hours of continuous sailing.  We would not have believed it before the start of the race that it would take us 22 hours to get out to Clallum bay, and then only 7 hours to make the return trip.

Our check-in with race officials. As one of our crew handed over the GPS tracking device the official asked why the GPS case was wet. We replied that we thought that they’d appreciate it if we washed the puke off the device before we returned it.  There was a nod of approval, and then they moved on to the last bit of official business before our race experience was officially over. 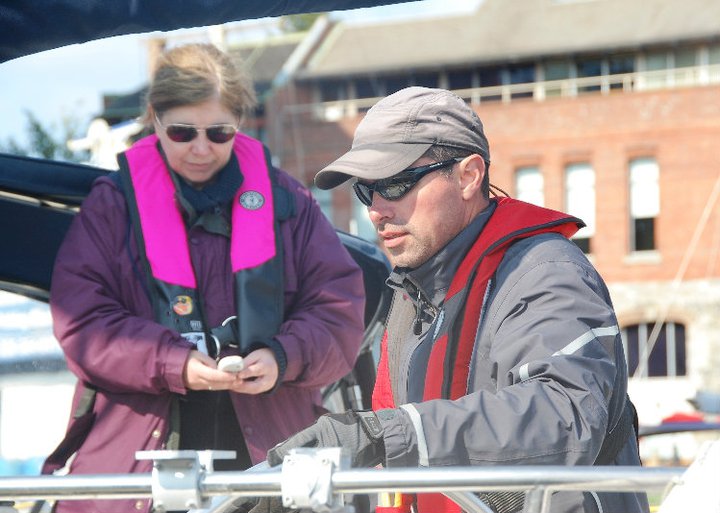 After we’d tied Big Ben up, the pizza and our spouses arrived, and we enjoyed some time in the cockpit eating pizza, drinking and telling stories about our 30 hour Swiftsure adventure. Swiftsure this year, and the Victoria Maui Race next year?