An exciting weekend around here. On Friday, Rich and I celebrated our 16th wedding anniversary by taking a 5-hour mini cruise around the ocean to a few little Islands nearby. The ship was manned by a pirate and his female slave/fellow pirate (she switched in between these roles). As we embarked with several other mostly Argentine passengers, they cranked up the music and began the 5 hour party! There was music, dancing, acting, swimming, touring, visiting, etc. For reasons we can only conclude are from pity votes, Rich and I won a dance contest which we only entered under duress from the female pirate. I have inhibitions about dancing on a raised boat deck dressed only in a bikini… especially belly dancing (yes, I did shake what my momma’ gave me… LOL). 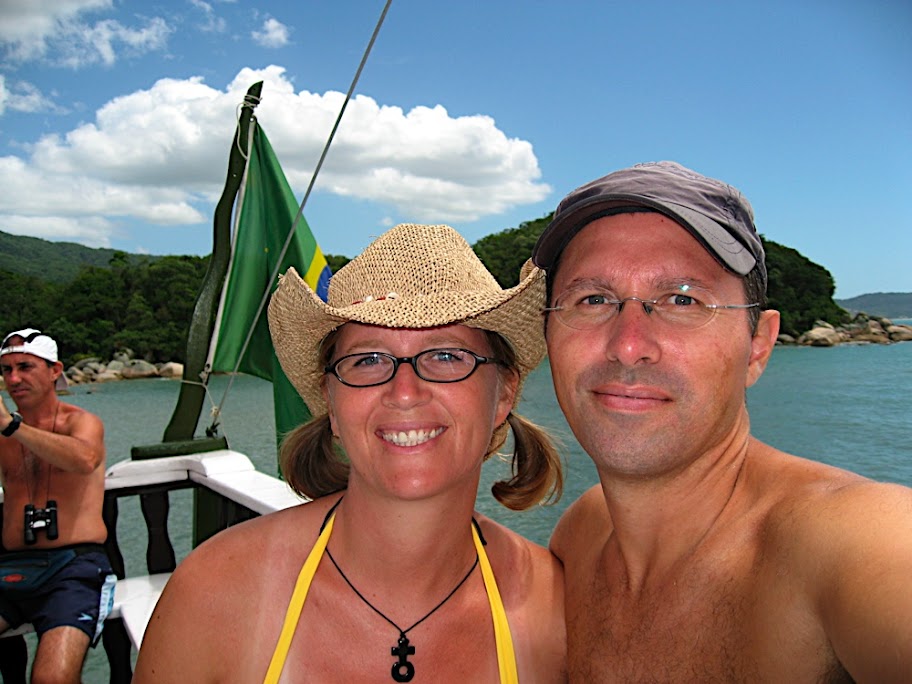 The first of the three stops we made was to a quiet coved beach, for lunch. The water was warm and greeny-blue. There are often dolphins there, but the party must have scared them off… The next stop was at a historic island where there were forts and old buildings. It was beautiful, though Rich had to translate all the information the tour guide was sharing and that meant we both missed out on much of the information… Our final stop was not an actual ‘stop’, but we anchored down in a beautiful area nearby an island, and were told we had about 15 minutes to jump off the boat and swim around. Rich managed to get thrown off the boat by the head pirate, while I took a more cautious entry point from the rear of the boat, off a ladder. We swam around the bath-tub temperature waters, admiring the nearby island and hoping for a glimpse of a monkey. As we headed back to dock, they stepped up the party even more with louder music and bigger dances. By this time, everyone was 100% wrapped up in the mood and even those who had been reluctant to previously, were dancing around the deck. All in all, it was an unforgettable anniversary date and we loved our day together. The kids all survived at home with no major injuries, so that was nice to come home to.

Saturday, to end off our anniversary, Rich had me booked in at a salon for hair highlights, a manicure and a pedicure. I was pampered and poked for a good long time. Sadly, I got really warm at one point, and while she was cutting some cuticles on my fingers, I began to feel unwell. I started to get pale and I knew if something didn’t change soon, I was either going to pass out or puke, neither of which were attractive options. Rich had thankfully stuck around to help translate, so I told him in earnest that I needed some help. They got the fan on me and took a break from the pampering, and before long I was as good as new. I was a bit embarrassed as I felt they must have thought I was some Canadian wimp who can’t even stomach a manicure. But thankfully, they were very understanding and the rest of the morning went without a hitch.

Saturday evening, we had the opportunity to go to a Capeiora show of sorts. A bunch of more advanced students arrived at the local studio we’ve been taking classes at, grab some musical instruments, formed a circle, and created a beat for the two Capeiora dancers/martial arts in the middle to do their ‘thang’. It was amazing to watch their body control and movements as they smoothly pushed, kicked and swung themselves around the small circle. We will not even begin to get that good while we’re here, but it was nice to see how it’s supposed to look, after watching our own choppy moves for a few weeks. The event was later in the evening, and we eventually left when both Emily and Jillian fell asleep on the floor beside me. Luckily we only had to carry them one street over.

On Sunday, it was a hot, beautiful day, so we headed off to the Ingleses in the late afternoon for a swim and some night life. The kids loved the calmer waters and even Jillian learned how to tread water a bit, as well as jump up with the slower waves to avoid the waves rolling right over her head. There was a parade of party boats out in the deeper water, complete with fireworks, dancing and music. As the sun began to set, we packed up off the beach and headed a street over to grab some dinner. Carnival is coming up next weekend, so there is a party mood all over the Island. We caught up with a band practising for carnival and followed along with the beat that was pounding through the pavement. We grabbed some ice cream, watched people for a bit, and then headed home on the 7:30pm bus. It was an awesome night. We can’t wait until Carnival!

We now know how to extract be bicho de pe from feet. Emily learned her big toe was a bit sore and came to me to have a look. It looked like a callous/blister with a dark centre… something I wasn’t familiar with. We called our wonderful neighbour, Kevin, who was both familiar with how bicho de pe’s look like, as well as how to get them out. He came over shortly and confirmed that Emily did, in fact, have this little flea burrowed into her big toe, near her toe nail. He graciously set about extracting it, complete with the several dozen eggs that had been laid inside the skin. Emily was as brave as she could be. There were a few tears, but all in all, she did a good job of allowing Kevin to get the problem looked after. I would go into the details of how to get a bicho de pe out, but I’m afraid I’ll make the weaker readers feel ill. Let it be known, though, that it involves cutting, squeezing and digging… ‘nough said. We know this is very common here, and we are prepared to have it happen again, but we’re REALLY hoping it’s something we can avoid if possible. Everyone will be wearing flip-flops routinely outside from now on.

Today is going to be a quieter day. We’re needing some quiet time after a busy weekend, plus I’m getting over a head cold. Rich took four of the five kids to our Capeoira class this morning (I bowed out due to a sinus headache), and we’re looking forward to bathing a stray dog today, in hopes of pretty-ing her up so she can find a good forever home.